With 883 posts, chances are there's already an answer to your question. Please try searching below before submitting a question to Dr. Potato. Use multiple words to help narrow down the results. For example, search for "potatoes" and "group" if looking for an answer on cooking potatoes for large groups.

Back To Dr. Potato Home

Should I Boil My Peeled Russet Potatoes Whole Or Cut Into Chunks For A Salad?

Should I leave my potatoes whole or cut them into chunks for boiling peeled russet potatoes for a salad?

There are many conflicting recommendations, however I'd recommend you check out the ones from Cooks Illustrated and Alton Brown for the best details as to what testing results they found. My personal opinion follows:

When I first joined the Idaho Potato Commission, the big questions we often received were "do I use red or russets for potato salads?" and many of the cooks calling or writing in felt that only reds worked because the russets broke down or crumbled. The major cause for this with the Idaho Russet Burbank or Russet Norkotah varieties is over cooking the potatoes or letting them absorb too much water. So I started experimenting on my own and found that starting from a whole potato meant that the outside parts were always done before the inside. There is also a part of the cell structure that runs right down the middle or length of each potato that is sometimes takes a little longer to be fully cooked. Cutting into even sized chunks seemed to do these positive things:

The amount of water needed to cover the potatoes was less The potatoes, when started from cold water (always recommended) to boil took a lot less time Each potato, if left whole, had to be cooled down before cutting and this often resulted in continued cooking of the insides, making the potato texture break apart when cutting with a knife. 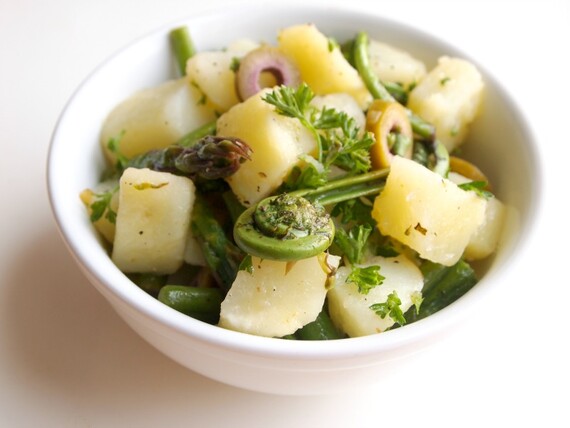 Dr. Potato isn't a real doctor but a team of potato experts ready to answer all your potato questions.

Have a question? Dr. Potato will be sure to get your question answered within a week.
Click here to submit »