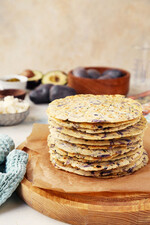 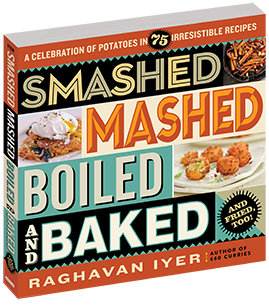 The potato, indigenous to South America, did not get to Mexico until the eighteenth century. That the Spaniards took it all the way to Europe before it made its way north is quite unimaginable. Corn tortillas, on the other hand are distinctly Mexican and Central American, but versions do exist in South America, made with the same masa. The inclusion of other flours is common in Latin America, as is altering the thickness of some of their flatbreads (think Salvadorian pupusas). The potato shreds in this recipe offer a purple landscape to a thin, pliable, and flavorful flatbread that puts any store-purchased corn tortilla to shame. And the fact that two out of the four largest crops in the world are in one recipe (corn and potatoes) is so cool in my nerdy estimation. - Raghavan Iver

Jonathan made this recipe for us as part of a Cook the Book campaign for Smashed, Mashed, Boiled and Baked by Raghavan Iyer.